The closest thing ever to the multi‑championship winning MotoGP YZR‑M1 ‑ and the pinnacle of superbike performance.

Cutting-Edge Crossplane Engine
The 998cc inline 4-cylinder, crossplane crankshaft engine features titanium fracture-split connecting rods, which are an industry first for a production motorcycle. The titanium alloy used to manufacture the connecting rods is around 60% lighter than steel, and this reduction in weight gives the R1M engine a responsive and potent character at high rpm. This stunning engine delivers extremely high horsepower and a strong pulse of linear torque.

Titanium Exhaust System
The R1M is equipped with an exhaust system manufactured primarily from lightweight titanium. The compact midship muffler also centralizes mass low in the frame and as close to the center of the machine as possible, creating optimal handling.

Advanced Clutch
Yamaha’s assist and slipper clutch is used to give the rider more confident downshifts when entering corners aggressively, while still smoothly handling the torque of the R1M’s high-output inline-four motor.

MotoGP®-Level Controllability
Yamaha’s Inertial Measurement Unit (IMU) uses six axes of measurement: a gyro sensor that measures pitch, roll, and yaw, and an accelerometer that measures acceleration in the fore-aft, up-down, and right-left directions… all at a rate of 125 calculations per second. The IMU communicates with the ECU, which activates the technologies in Yamaha Ride Control (YRC): Power Mode, Traction Control System, Slide Control System, Launch Control System, Lift Control System and Quick Shift System with rev-matching. All these systems are adjustable and can be saved within four presets in the YRC system.

Factory Level GPS Telemetry
Another feature exclusive to the R1M that takes electronic control to the next level is Yamaha’s unique Communication Control Unit. The onboard system is comprised of the CCU and a GPS antenna. Running data can be recorded via a data logger, with course mapping and automatic lap timing managed by GPS. This data can then be wirelessly downloaded to the Android® or Apple® iOS® app where it can be analyzed, and setting changes can be made to later be uploaded to the R1M. This Yamaha exclusive Y-TRAC system gives a connection to the machine that has never been seen outside of the factory race pits, further blurring that line between production superbike and MotoGP® bike.

Lean Angle Sensitive TCS
The R1M’s Traction Control System (TCS) reduces rear wheel spin when exiting corners, calculating differences in wheels speeds and in relation to lean angle. As lean angle increases, so does the amount of intervention, with ten separate settings (off and 1-9) enabling the rider to dial in the exact level of control needed.

MotoGP®-Developed SCS
Yamaha’s Slide Control System (SCS) is the first of its kind on a production motorcycle and comes directly from the YZR-M1 MotoGP® bike. It works in tandem with the IMU, so that if a slide is detected while accelerating during hard leaning conditions, the ECU will step in and control engine power to reduce the slide. This too can be adjusted by the rider, with four settings (1-3 and off).

Lift Control System
The R1M’s Lift Control System (LIF) features progressive mapping to improve forward drive when the system intervenes. As before, the IMU detects the rate of chassis pitch and the ECU controls engine power to reduce the front wheel lift during acceleration, with four settings (1-3 and off) for fine-tuning.

Race Start Control
The R1M’s Launch Control System (LCS) limits engine rpms to 10,000 even with wide open throttle. It maintains optimum engine output in conjunction with input from the TCS and LIF systems to maximize acceleration from a standing start. Three setting levels regulate the effect (1-2 and off).

Up and Down Quick Shift System
The Quick Shift System (QSS) on the YZF-R1M features downshifting capability as well as allowing full-throttle clutchless upshifting. On downshifts, the ECU matches engine speed on each downshift for instantaneous gear changes with minimal chassis disruption. The QSS can be adjusted with three settings (1-2 and off), as well as turning the downshift function on and off.

Full Color Instruments
The R1M features a brilliant full-color, thin-film transistor (TFT) meter, including front brake pressure and fore/aft G-force readouts, giving the rider even more feedback from the machine. It features both street mode and a track mode that focuses on performance information, such as YRC settings, a zoomed-in view of the tachometer in the upper rpm range, a lap timer with best lap and last lap feature, gear position indicator and speed.

Deltabox® Frame
The slim aluminum Deltabox® frame, magnesium subframe and polished aluminum swingarm contribute to a lightweight and compact chassis design, with overall geometry refined on racetracks around the world. The rigid motor mounts use the engine as a stressed member of the frame for optimal rigidity balance and great cornering performance on the race track.

Aluminum Fuel Tank
The hand-polished aluminum fuel tank weighs in at a full 3.5 pounds less than a comparable steel tank, further reducing overall weight, and is sculpted to give riders a good lower body connection to the machine.

MotoGP® Styling with Unique R1M Detailing
Dynamic YZR-M1 styling creates a more compact profile with improved aerodynamics, getting you closer to MotoGP® than any other production motorcycle available today. R1M riders are treated to even higher levels of fit and finish thanks to carbon-fiber bodywork matched to a hand-polished fuel tank and aluminum swingarm.

All-LED Lighting
LED headlights are both lightweight and compact, allowing for a more streamlined design of the front face. LED front turn signals are integrated into the mirrors for improved aerodynamics, while an LED tail light is stylish and highly visible. 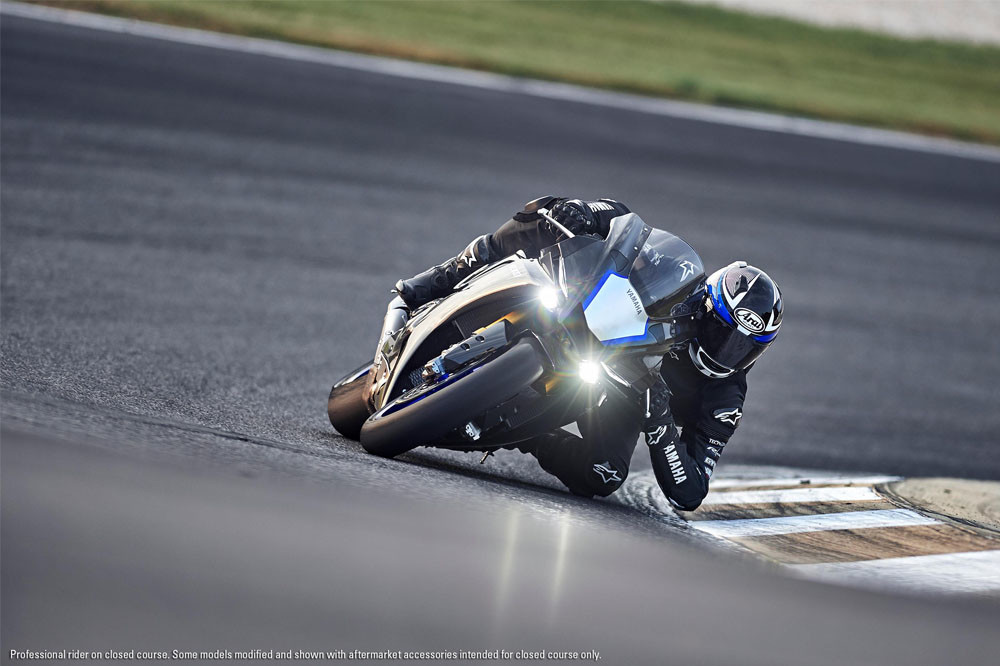 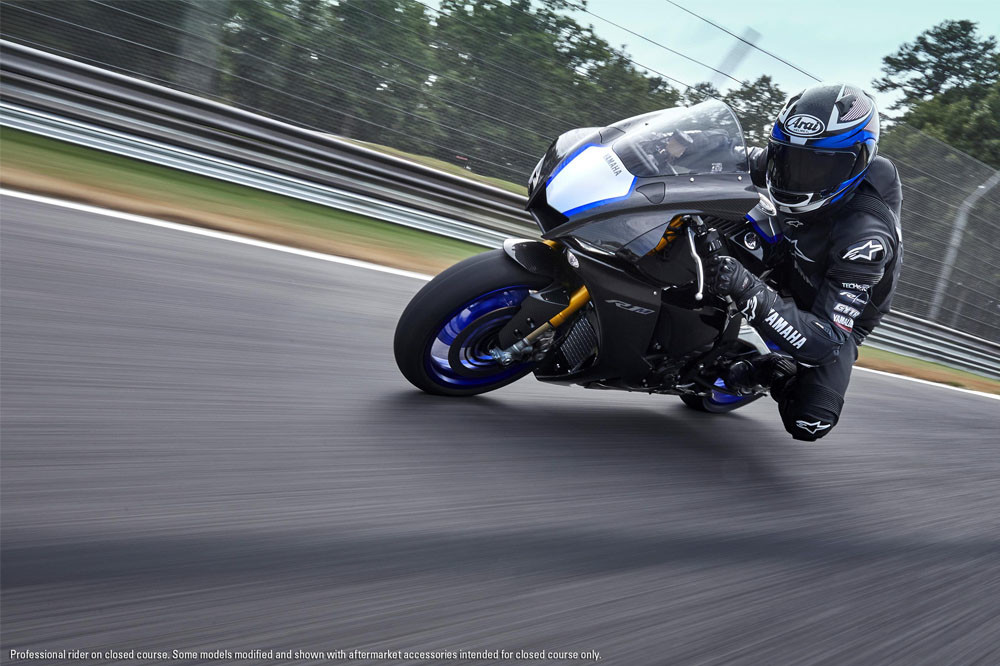 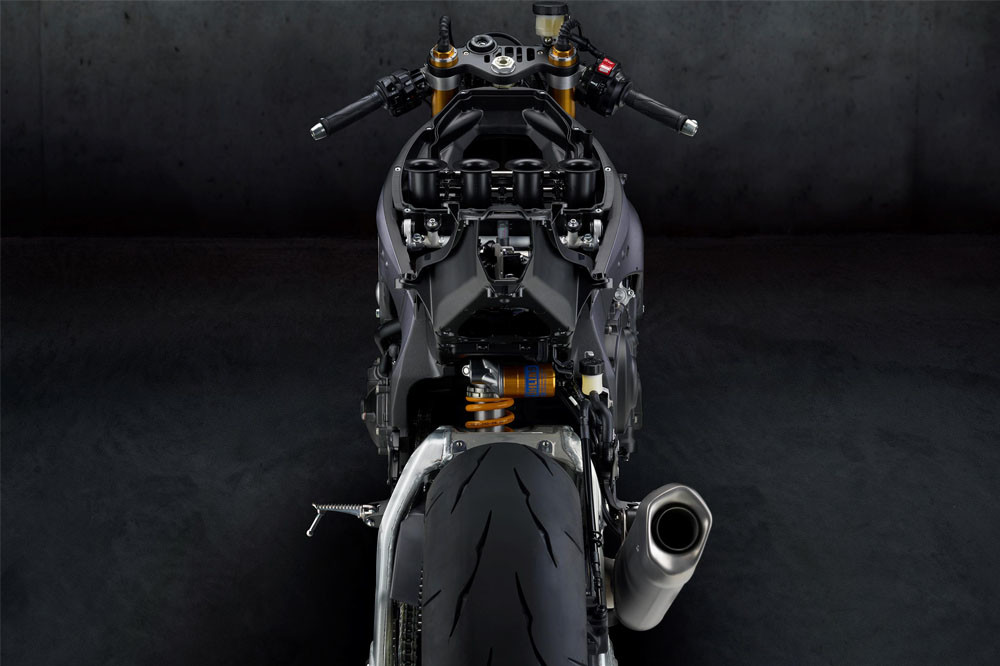 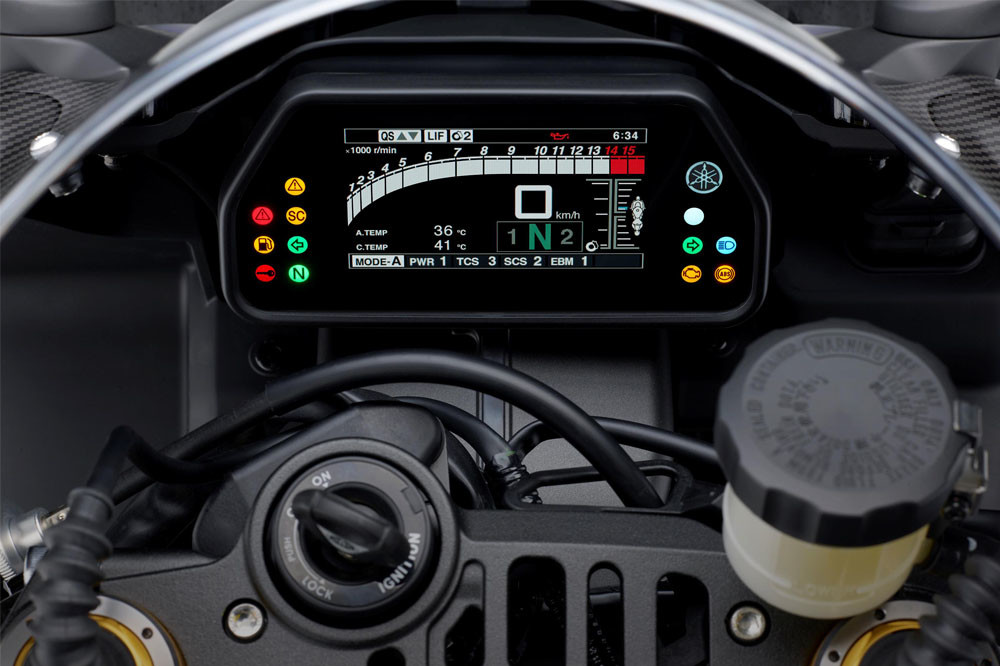 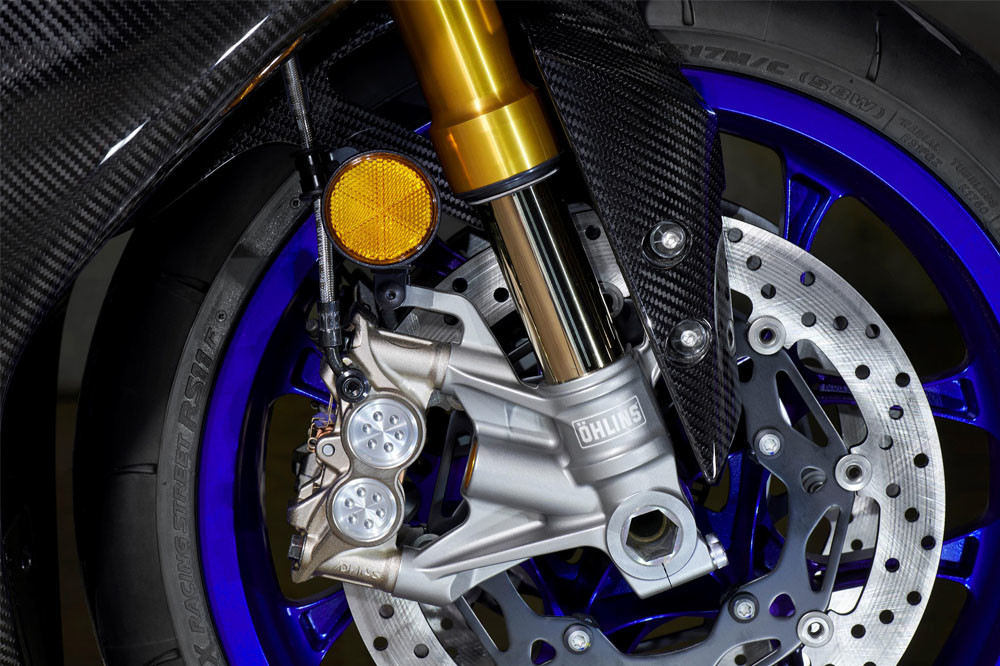 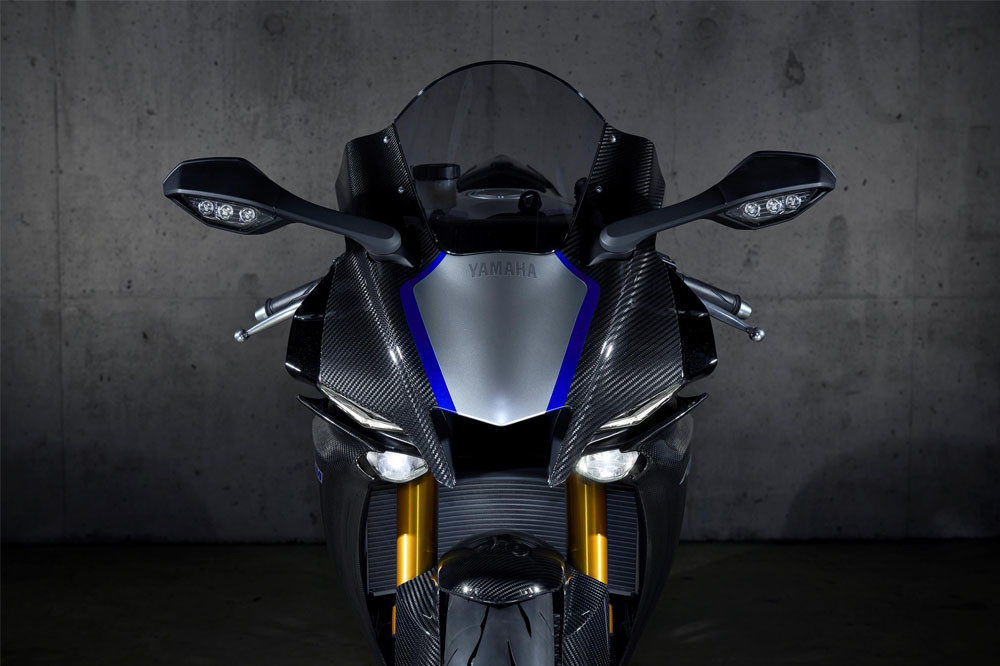